Menu
Log in
Register
Install the app
You are using an out of date browser. It may not display this or other websites correctly.
You should upgrade or use an alternative browser.

This forum seems to have kicked off well with the Dev Raga podcast summaries (which ive yet to listen to/read - but they look very juicy, so i will in due time) but I though I'd start some discussion.

What bank accounts do we all use?

I think as interest rates drop across the country we should all pay a little more attention to the banks we use and try to squeeze every percent where possible. I'm in the process of moving over to a Westpac Choice + Life combo which gives me a 3% variable interest rate (0.2% base + 0.2% if i grow my savings each month + 2.6% if i use my card more than 5 times in a month) after ditching my Newcastle Permanent account which I've had for 10+ years because it had 0.01% return on it.

Features that were important in my decision were the
This account is restricted to 18-29 year olds who have less than 30k in savings so your YMMV. But I think nonetheless this is a good way to start being more financially conscious and to encourage some savings. I recommended it to my sister a few months ago and she's had no troubles thusfar, and enjoys the convience of being able to pay on her Apple Watch.

What are your thoughts? When was the last time you thought about how much you save/spend? or What bank account you use? Is there anything I'm missing? or something you want me to clarify ?

Ask or suggest anything and everything!

Keep in mind this is not specific financial advice and i am not a financial advisor. Im just a stranger on the internet sharing his thoughts.

Administrator
Wherever possible keep fees as low as possible.

with banks, it’s not uncommon as you progress in your career - you wield more leverage and power to negotiate your own terms.
Dev Raga

Personally am a massive fan of Up Bank due to the 'flashy' technology available in it. Two favourite features of Up Bank are Income splitting and the round up saver. Other notable ones include PayID, very well designed spending insights and weekly spending updates among others.

Income splitting is a tool where it recognises which one of your incoming payments are your wages and you can set certain %ages to split into different savers you have. For example, currently I have 3 saving accounts within the bank. First is growth where I simply yeet the money off into an ETF once it builds up. Another is 'Expenses' which I use for everyday expenses and the last is splurge which I use to basically splash my money around on things I don't need. My % settings vary a lot depending on a few things but right now I'd describe myself to have a very high saving setting because of very few other expenses I have atm. 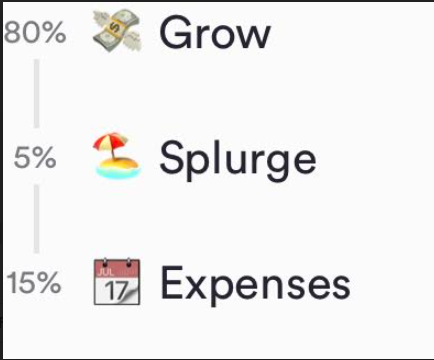 Round up is where it takes any spendings you have such as Coffee for 5.65 and it rounds it up to $6, sending the excess into your saver. Firstly it keeps your spending account rounded to a nice number and secondly you add a tiny bit to your savings!

In terms of savers I am not too fussed about % returns as, apart from a bit of money for emergencies, I send off the rest of my savings into ETFs.

Moderator
Interesting. I used Up Bank as a spending account for the last year and can def attest to the tech aspects of it. I decided it over other neobanks like Xinja or 86400 cause it was backed by Bank of Adelaide and Bendigo so i could see some long term future in it staying around without the hassle of changing accounts over etc. It was def super convinient to be using Apple Pay, and for a large part of the year I really only carried my phone with one of those rubber pockets that stuck on the back of it cause I didnt need a wallet for my debit card.

The round up tool was pretty cool i gotta admit. It definitely started to add up quickly when i was out and about, shaving 50 or so cents from each purchase, a few times a day, a few times a week, over a month or so it was a pleasant suprise when i remembered it after a month lol. I guess its true that from little things, bit things grow (Industry Superfund vibes)

I never really utilised the savings account features like you mentioned but its definetely a good idea for those getting started. I remember about 8 or so years ago I used to keep a small notebook that I would write down how much spending money I had in my bank account as a % of whatever pocket money I earnt, but I've since gotten pretty used to what constistutes a reasonable amount to spend, but its a good way to learn the skill of balancing savings and spending nonetheless.

One thing that annoyed me about Up though is that I would have to pay an ATM fee whenever I took out cash cause they didn't have ATM's. As someone who flips quite a bit of product on facebook marketplace, I ended up racking up too much fee's than was reasonable. Also the lack of online computer banking was also inconvenient.
MSO Newbie Guide > CY's MSO Welcome Guide
UCAT > Hazell's UCAT Guide, Smelly Boy's UCAT Guide
Admissions > A1's Collated Admissions Criteria, LMG!'s Collated Admission Scores
Post Offer/Denial > Mana's Common Pitfalls (for Denials), Mana's Guide to Multiple Offers
Whatever you do, dont press > this link <

God that reminds me I haven't withdrawn cash from an ATM in at least 3 years! If I did have to I'd probably do a quick PayID transfer to Commbank account that I use for commsec + old saver and use that.

there are no stupid questions, only people

Administrator
Other than an emergency fund to support you in case of emergencies, is there really any point in putting your cash into a bank account which pays interest at less than the inflation rate?
If you want to do med overseas, do med sci or similar, or repeat year 12, first check: Common pitfalls to avoid

If you want to buy me a coffee, feel free to send bitcoin to me: 1JH9NaF8pGbfLSz5aK374sTMxSwv29AE29​

Moderator
I think not... most of my money is tied up in investments that make more than inflation. However somethings better than nothing, and I think alot of people getting started on personal finance would rather not touch stocks cause they seem pretty scary to newbies... i think paying attention to bank accounts is a good start
MSO Newbie Guide > CY's MSO Welcome Guide
UCAT > Hazell's UCAT Guide, Smelly Boy's UCAT Guide
Admissions > A1's Collated Admissions Criteria, LMG!'s Collated Admission Scores
Post Offer/Denial > Mana's Common Pitfalls (for Denials), Mana's Guide to Multiple Offers
Whatever you do, dont press > this link <

Mana said:
Other than an emergency fund to support you in case of emergencies, is there really any point in putting your cash into a bank account which pays interest at less than the inflation rate?
Click to expand...

One of the other reasons you may wish to have cash in a savings account is if you want to use that cash for something purposely in the short term future - saving up for education, car, or home deposit.
Dev Raga

there are no stupid questions, only people

devraga said:
One of the other reasons you may wish to have cash in a savings account is if you want to use that cash for something purposely in the short term future - saving up for education, car, or home deposit.
Click to expand...

Assuming that there is an emergency fund set aside, what is the advantage of a savings account where you are guaranteed to lose purchasing power over putting the cash in a diversified but liquid portfolio such that the assets could be liquidated at short notice when you want to pay for that thing in the short term future?
If you want to do med overseas, do med sci or similar, or repeat year 12, first check: Common pitfalls to avoid

If you want to buy me a coffee, feel free to send bitcoin to me: 1JH9NaF8pGbfLSz5aK374sTMxSwv29AE29​

Valued Member
I use the combination of westpac 3% life account for 30k savings and a BOQ youth saver for another 3% at 10k. I opened my BOQ one when it was originally at 4% but since then rates have dropped. For spending, to really max out everything I've got my monthly spending money into a HSBC everyday global account for 2% cashback on any tap to pay purchases under $100 for a max of $50 a month (I don't spend nearly that much money but you can get like a free bubble tea at the end of each month with the cashback money). Also maintain a commbank account because of their dollarmite stuff back in the day but now its just convenient to get instant transfers.

40k savings capacity at 3% and then spending money guarantees 2% cashback so you'll always be guaranteed a return on your money no matter what you do with it. None of the Up Bank fanciness but the system works for me right now. Eventually I intend to throw any overflow from the savings into some stocks or something. Haven't got that far yet though.
heh. Remember that time Curtin messed up big time? If you know, you know.
You must log in or register to reply here.